Damn near every movie you've ever seen uses this phrase. So does Fark.

This is a variation of a theme found in The Onion's "Our Dumb Century," which is a collection of fake newspaper articles supposedly published all across the 20th century. One of the jokes is that every time there's a war (World War I, II, Vietnam, etc) the words 'French Surrender' follow the headline.

Study: after years of research scientists come up with obvious conclusion

For whatever reason message boards on sites like Fark are forever plagued with morons posting "First Post" anytime a link is posted. Fark automatically turns the words "first post" into the word "boobies" and resets the timestamp on the message to some time in the future so that it isn't the first post anymore. Attempts to evade that sometimes result in it becoming "weeners" instead of "boobies".

The "Boobies" line item in your MyFark profile is the date of the first post you ever made to Fark.

It started with a picture of an ugly-ass baby rhinoceros born at the Cincinnati Zoo. The thing was seriously ugly. As it turns out, ugly-ass baby animals are born all the time. We usually post them when they show up in the queue. There's no good explanation for this.

Wil's a regular reader of Fark. We attracted his attention one day after linking to his website, he came here, and keeps on coming here. The night he appeared on the Weakest Link with other Star Trek actors, Slashdot linked to his website and crushed it out of existence, so he hung out on Fark instead and answered questions. We were glad to have him and he even has his own tag: 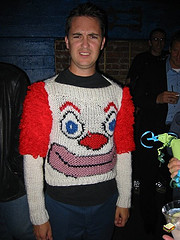 As you can see, he's a man to be reckoned with. It also turns out that Wil's a nice guy who has been living under the shadow of that horribly-written Wesley Crusher character that he played as a paying job for several years. He seems well on his way to overcoming the stigma however, and we're happy to support him in that endeavor.

Hollywood is out of ideas

Seems like they're cranking out nothing but sequels and live action cartoons.

Drew lives in Kentucky and like many, many people in Kentucky, doesn't like Duke basketball. He normally refrains from injecting his personal opinion into link titles but can't help himself on this one.

For those of you that don't live in Kentucky and don't know the background, most of it has to do with the March 28, 1992 game.

Still no cure for cancer

Attached to taglines on articles about useless research, implying that researchers shouldn't be wasting their time on studies that conclude that drinking a lot will give you a beer gut (That was an actual study.)

This was tacked on to the end of an article about a Japanese device that allows you to communicate with your dog. The joke being anyone who has had a dog can tell you that dogs are not incredibly complex creatures. You can tell what they want just by looking at them.

A line out of an incredibly bad shampoo commercial that Ben Affleck did overseas. His contract stipulated that it never be shown in the US. Obviously you can find a dozen copies of it in under three seconds on YouTube.

Farkers just started using this one day after seeing the phrase in Fun Reports (the site has since closed). The joke is that the poster judging the desirability of a woman (or lack thereof) is not much of a specimen himself and therefore in no real position to make that call.

Reports the obvious, usually long after everyone else knows it's obvious.

Dates back to 2002. The media loves whipping people up into a panic over nothing. We love to mock them for it.

Appeared in a Photoshop contest.

Abbreviations for "Link Goes Nowhere" and "Details In Thread", used for discussion/advice links where the link doesn't actually go to an external site.

Die In A Fire. It comes from Carolyn Beck of the Texas Alcoholic Beverage Commission who once said: "I don't really understand the hateful outrage. I don't understand, 'Die in a fire'."

When a site is linked on Fark, it sometimes leads to unintentional server overload and eventual failure. This isn't necessarily a bad thing since traffic = ad revenue and the Farked™ site often gains new long-term readers.

These didn't originate on Fark, but you've probably seen them here and everywhere else. Use Google if you want more information.